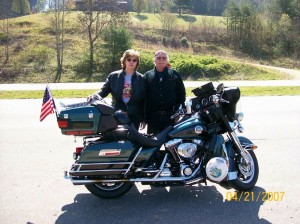 Janet K. Bridges, LPN – ASM Lead instructor
Janet is from West Virginia a place where curves are the normal.  She road motorcycles as a young lady: Postponed to raise a family and pursue a career in nursing.  She moved to North Carolina and met her best friend “husband” and began riding with him.  She said a short ride is 300 miles or so when they start for a noon ride.Janet has been in the nursing profession for 20 years.  She has worked in a family practice, as a nursing supervisor at an assisted living facility, and for the past 7 years as a charge nurse in a long term care facility in Charlotte, NC.

Janet is a member of Charlotte Concerned Bikers Association Abate of NC.  She is also a member of M.R.F. Motorcycle Riders Foundation.

John C. Bridges III “Uncle John” – Assistant Instructor
Uncle John has been riding motorcycles since 1959, when he started riding his father’s cushmen scooter.  He has over the years owned and ridden motorcycles of all makes and models.  Uncle John has also raced and owned modified midgets and mini sprints using motorcycle and outboard motors.  He is also a P.A.D.I. open water diver.  He now enjoys touring on his 2001 Ultra Classic Harley Davidson with his best friend “ wife” on the back saddle.Professionally, Uncle John has owned and operated several successful businesses, also worked in the electrical, hydraulic and H.V.A.C. fields.  He now is working in the health care industry as Director of Maintenance and Environmental Systems M.F.A Charlotte, NC.Affiliations: Concerned Bikers Association (C.B.A.), Abate of NC, Motorcycle Riders Foundation (M.R.F.), Honda Riders Club of America

To contact Janet or John for a class fill out the online form.