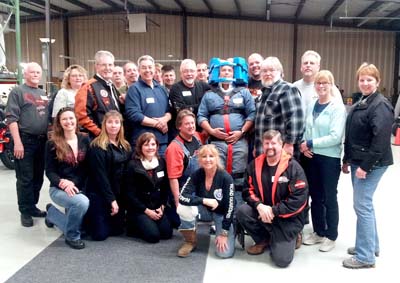 We had a picnic ride with another Chapter that we do every year. Some bad weather was forecasted to come in and by Kickstands up time it was cloudy but just starting to rain. The group left, as scheduled, for the back roads route to the picnic site which was about a 60 minute ride. The rain started coming down pretty hard and one of our riders took a 90 degree curve a bit wide. When he came out of the turn, the bike came back too far and off the berm of the road he went. The grassy slope was on a pretty steep incline and out in front of him were some big trees. He tried to avoid hitting the trees by laying the bike down. When he did, the foot pegs dug in, flipping him and his bike. He landed on his head and shoulder but luckily the bike missed landing on him.

We had 6 people on this ride who had been through ASM training and 4 of them had also been through the Advanced ASM class so our guys got to him quickly. They had several people control traffic at the scene and even sent one person up to the top of the hill and a sharp curve to control the blind traffic. The other 4 took care of the rider, assessing his injuries and keeping him warm and dry from the rain. Others called 911 which got EMS there in 10 minutes, what they claimed was record time. 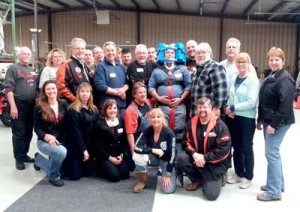 Our Road Captains wanted to dive in and help but they stood by professionally, offering their services once the rescuers arrived, turning the scene over to them like we are supposed to and overall it went pretty well. The police officer said, “your guys really got your act together”.

Join our efforts to reduce injuries and fatalities to motorcyclists through education by becoming a Road Guardian Member today!

Later, we brought the crash up and discussed it with our membership, explaining,  how important and helpful our training was at this accident. The guy who had been in the accident asked if he could talk to the group and told them how well our Road Captains and a couple other members took care of him during this ordeal. He said that he and his wife were so grateful and thanked god that they were with our group when this happened.

BTW: he’s doing fine, he had 2 pins in his neck from a previous injury that this accident irritated and was causing him severe headaches and he had a slight concussion. On behalf of my group, we are blessed to be able to share some of your knowledge when needed with our members. There is no doubt that this training has made us a stronger team, but now as the very first at the scene, we know what to do to help a rider and maybe even save his/her life.

We are so grateful to ASM and the dedicated group of instructors ASM serves! Has your group been trained in how to help if someone goes down? What are you waiting for???

ASM instructor certification spring training will be added by the end of October. ASM classes and currently certified instructors are available at: www.roadguardians.org.