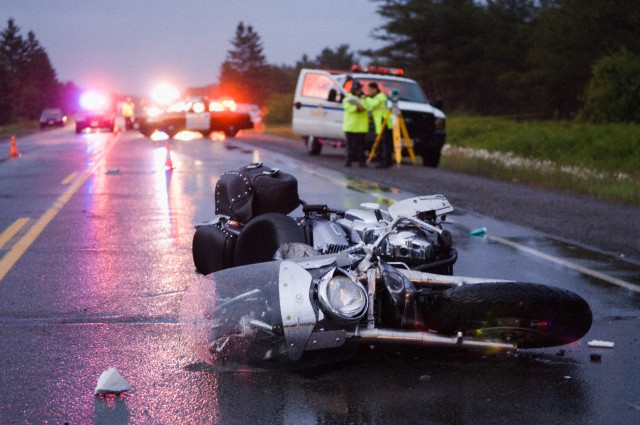 Dear Megan:
A year has gone by since my ASM Basic Class training at the Sandy Hook Fire Dept. I walked away with new knowledge, some practice, and a clearer understanding of how I can help in the event of an accident. Since then, I have acquired a rather fat first aid kit, loaded with an assortment of aids, and have promoted ASM education within my motorcycling community. I also became a member of the Road Guardians to support ASM training. However, it was not until three weeks ago that the knowledge you taught me would be tested in the real world.

About 11:00 p.m. on a Wednesday night I was leading a group of five bikes in Manhattan. We headed north on the FDR when I and another rider lost control due to an oil slick in the middle lane. I managed to control my bike, but, unfortunately, my friend Don and his wife were not as fortunate. Thankfully, there was no collision with any other vehicle, but the scene was quite unsafe as we were in the middle of a highway, where speeds of 50+ mph are not uncommon. 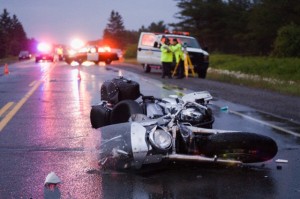 Seeing that they were down, and Don’s wife was on the ground, I safely parked my bike and rushed to them, gathering fellow riders along the way. I quickly ascertained that Don’s wife was conscious, but in pain. I quickly checked for blood trails, and not finding any, I asked for her name and date… a few quick and easy particulars to make sure she was coherent. I called for two people to block the two right lanes about 40 yards out so that they could be seen from a far by oncoming vehicles. This slowed down the traffic and pushed it safely around us, keeping Don’s wife out of harm’s way.

Even though I was “married” to her visibly injured knee (she couldn’t straighten it out due to severe pain), I managed to get everyone in place and have them make calls to 911, all within a minute. As I firmly gave directions from above her, I asked her husband to softly complement her on how well she was doing, and tell her how much he loved her. He gave me a dirty look, but I insisted and he did so, calming her a bit. I slapped his hand when he tried to take off her helmet, twice. As I recall you’ve said… “No bueno.” Another dirty look from him, but I understood his concern for his wife and didn’t take it to heart. Within 10 minutes we had both police and fire departments on the scene. Since I was “married” to her leg, I was asked to help roll her on the stretcher, after which she was strapped down, her leg propped bent, and rolled into an ambulance. All survived, her knee was bruised badly but she is expected to recover fully.

The whole thing was very stressful for some of my riding buddies, but when you know what steps need to be taken to prevent further injury, ascertain the situation and make practical logical decisions to get help on the scene, the entire event takes on a very different light. It is manageable. After she was hauled off to the hospital and we were released from the scene, I took stock in how well and how quickly we all managed to get things accomplished safely. All cogs fit very well into the machine when properly organized.

Both Don and his wife have thanked me several times since that night and, in turn, I thank you. Thank you for teaching me how to quickly interpret a scene, determine the extent of injury, take command and get help in a bad situation while preventing further harm. I could not have done this without the knowledge you passed on to me. From my heart, I thank you.

ASM training is the largest motorcycle trauma training organization in the world and the only accredited Bystander Training in the United States. ASM training can help anyone feel more in control and have a logical approach to Crash Scenes. Are you trained? Are your friends? Go to: http://roadguardians.org/schedule/ to find a class or http://roadguardians.org/instructor-bios/ to find an instructor.