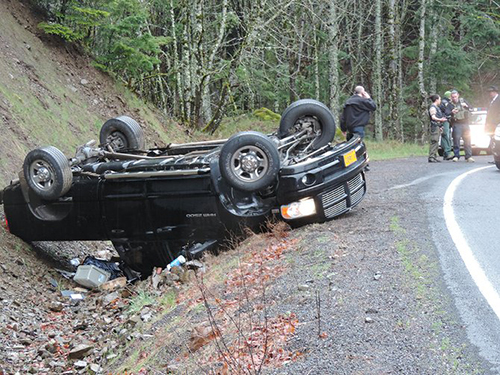 She was pinned in her truck, upside down… 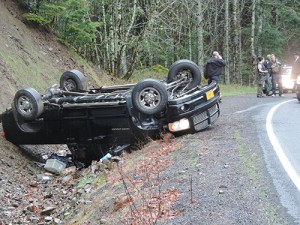 I had to use my ASM skills on our big ride last weekend for a lady who rolled her truck in the opposite lanes just as we were approaching – She was pinned in her truck, upside down and it took over half an hour for EMS to get there – There wasn’t a lot we could do, but I made sure there wasn’t anyone else with her, checked her for bleeding and feeling in her extremities, got her calmed down and talking as best she could. I tried to get vitals and info to give to First Responders – It was seriously scary stuff for us! Anyway, that got me really thinking about how long it’s been since our class.

Unfortunately, we had to leave her ‘hanging’ -for nearly 40 minutes – That’s what made it so scary! – We saw her drift into the median and then she over corrected right onto the shoulder, where she flipped over twice and landed upside down. We pulled over and I immediately checked traffic and ran across the divided highway, taking my helmet off on the way. 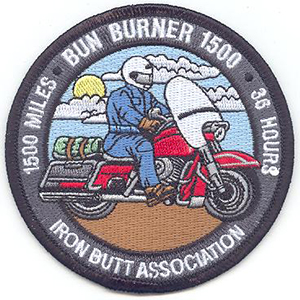 I reached the truck and saw that the cab was crushed, so I climbed around to the passenger side where I got on the ground to see in the window. I could see the woman, upside down, screaming to help her get out. I told I was there and would try to help. I asked her if anyone else was with her – She said “No.” (Thank God because the back seat was completely crushed from seat to roof!) I told her I wasn’t leaving, I just needed to make sure help was coming and I asked my husband, who had followed me over, if the truck was stable or leaking – He said it looked OK, so I told him to make sure 911 was called and I belly-crawled into the cab. I asked her for her name, made sure she could breathe, did a visual check for bleeding and told her I was going to touch her feet and hands and asked if she could feel me touching her – which she said she could. I asked her where she was hurting, but she wasn’t sure. She was still panicking about wanting out, so I had to tell her, very firmly in my mom voice, (which I hope is both firm and reassuring?) that yes, she could breathe, she was OK, we were getting some help to get her out and that I needed her to be as still as possible and take long slow breaths with me. 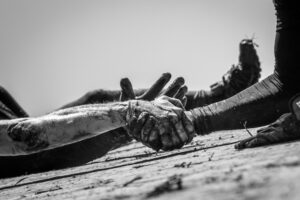 She had all of her weight that wasn’t supported by her seatbelt, on her neck and shoulders with her head kinked to the side on the ceiling and the steering wheel and dash preventing her feet from reaching the floor – Her side of the cab was almost completely crushed with only about 3-4 inches of light showing through her window. The center console/ armrest of her bench seat had flipped up and was wedged at an angle against the ceiling. She was very effectively pinned. Since she was breathing and not visibly bleeding – and without any way to immobilize her head and neck, there just wasn’t any way to move her without risking further injury. So we waited for the guys with the right tools and I did what I could to try to keep her from panicking or going too deeply into shock too fast.

At one point a man came up and said he was a doctor, so I got out to let him in, but then he got out about a minute later and said we’d just have to wait for the EMTs – (He just asked her where she was hurt – She said she didn’t know – and then told her he was going to get help…???) 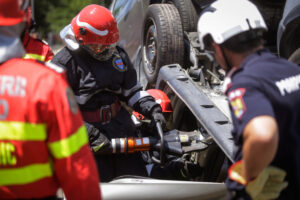 By then my husband had found a hammer and he was able to pry the passenger door open, so I got back in and kept reassuring her that I was with her, she was OK and that it wouldn’t be much longer. She was really scared and kept begging me not to leave. I just kept a hold on her hand and would occasionally rub her arm or leg and make sure she could feel me and after asking her a question,” Are you married?” “Do you have kids?” “Where are you heading?” I’d try count her heart beats at her wrist or count her breaths and listen for wheezing while she answered. She would start to panic every few minutes about not being able to move or she would start to hyperventilate and say she couldn’t breathe. I had to remind her that she could breathe, take long slow breaths with her and assure her that we would get her out in just a few more minutes. It helped to find things that were funny, like waiting “until the hot fire fighters” showed up or about how we’re both the same age, “too old”. I apologized several times because I wouldn’t take her seat belt off – it appeared to be the only thing keeping all of her weight off of her head and neck. My husband had directed people to move their vehicles and had to stop people from trying to “help” by trying to flip her truck back over or trying to remove the entire seat or just try to drag her out. 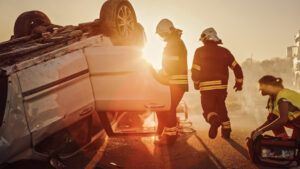 When the paramedics arrived I told her I was going to get out so they could get in to help her – She didn’t want to let go of my hand, but I reassured her that she was going to be OK, she had some REAL help there now and they were going to get her out real quick and then I got out as the EMTs reached the truck – I relayed her status and all of the info I could remember that might help them assess her, while they were figuring out the best way to reach her – They were going to have to wait for cutting tools.

So we left our contact info with the Sheriff, crossed back over to our bikes and continued on our ride. A minute or two later, I remembered we were trying to finish our Bun Burner 1500 Iron Butt ride and we only had about an hour to finish, (I had literally forgotten!) I thought we might miss the 4:00 deadline, but when we arrived at our last stop to have our ride witness forms signed, we had made it with 20 minutes to spare!

Have you taken and ASM class? Do you know how to help if you are needed? Learn how to be a Good Samaritan by completing ASM training. Click Here to find a class near you.