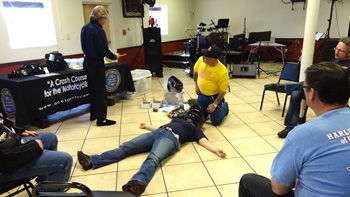 The last thing I remember is…

I have blurs, snapshots, flashes I think. I even hear all the stories. But I just think that I fell asleep and woke up to a nightmare, yet a miracle.

So here is my story

I have been riding a motorcycle since I was a kid, and leading local Harley members on rides for years. In 2011 I became an Instructor for ASM and started teaching Bystander Assistance classes. I always prefered riding in numbers, so it was no surprise that I would lead a group ride to my vacation spot. And it was a great vacation, until I became that motorcycle accident victim that I teach others how to save.

They tell me I was accelerating to get onto the freeway leading the pack. What my friends behind me remember is the flash. The debris spraying all around them. The horrible sounds. The slow motion of “WTF.”

Followed by the screeching of car tires burning rubber to avoid the mess.

Next came the questions and the chaos. “What the F… was that?” “What just happened?” “Where is Jeff” “Where did he go?” “Is that his bike?” “OMG where is he?” No one could find me. I was missing. Little did they know I was face down on the frontage road, about a football field away, in the dark all alone. Not conscious, but breathing. 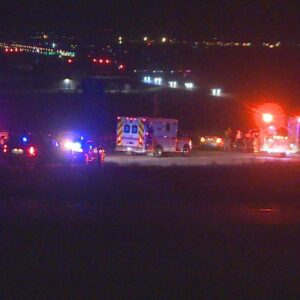 They tell me that an SUV took me out. Police later told the news that the driver was going at least 100 mph, while crossing all lanes of traffic to exit the freeway. He then blew a light and struck a hydrant, bringing him to a stop where he fled on foot while bystanders ran after him. A year later in court a newspaper delivery guy told the judge that he cornered the guy, who could barely stand upright, until the cops got there.

He got 20 years. I had to use Skype the attend the trial because I was unable to go. I was healing. I told the judge I was here and living because my student and good friend saved my life. Yep, my student. He SAVED my life.

Chris had taken the ASM Basic class from me just previous to the accident. He took the class along with other Harley rider friends to learn what to do in case a buddy goes down. As an Instructor, you never know if what you teach will “stick.” If the information the student takes in will go on to make a difference. And lo and behold, it did.

Chris found me in the dark. He saw some type of shimmer from my white shirt as I lay unconscious. He realized I was safe, and off the road away from traffic. He had to protect me. I was breathing, so no need to turn me over. He called for help and others came as he checked for injuries and found there was no external bleeding to control. 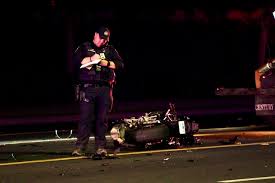 So he protected me. Made sure I was breathing, not bleeding to death. He made sure that no one moved me. Made sure EMS got a history and assisted me into the ambulance. Doctors tell me that I had a C2-C3 fracture, a ‘Hangman’s fracture.” I should have died on the scene. Yep. I should be dead. The trauma doc says one small movement of my head/neck would have severed my spinal cord and my breathing would have stopped.

I’d have a tombstone

In addition to having a hangman’s fracture, my pelvis was completely shattered. My arm was hanging off, no elbow left. My brain was bleeding. I was internally bleeding to death. A doc saved my arm, rebuilt my pelvis and my brain healed. Somewhere along that timeline, I came out of my coma. It took about a year. I still limp. I have scars. I have pain. But I am living.

It is all about doing the right things at the right times. If it had not been for Chris taking my course and knowing what to do, I wouldn’t be writing this. ASM saved my life. It really did. 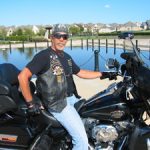