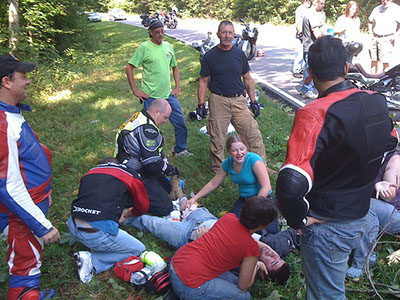 Michele, Roxanne, Steve and I received our Basic, Advanced and Instructors ASM certification from Vicki Sanfelipo in Santa Cruz last fall and we all happened to be on this ride together. I can tell you that I have personally used my skills in 5 separate incidents – 2 of them being serious accidents. Others in our group have reported being called upon in separate incidents of their own. Sad to say we were called upon again, to protect, prepare and serve an injured rider.

Our pack of 17 motorcycles were cruising at just under the flow of congested traffic conditions on a busy northern CA highway on a hot day. I was behind a rider who, it seemed, did not immediately react to a rapid deceleration and slowing of traffic to a crawl until too late. In a last ditch effort to avoid impacting the bike in front of her she braked hard; performing a 150ft rear wheel skid. (There was no evidence that there was any use of front brake to stop the bike). She still clipped the bike in front of her, flipping her bike, and both rider and bike slid across the road as if they were toys. The rider was thrown off of the bike and rolled to a stop landing face down. (Thankfully the rider she rear ended was able to maintain control of the bike) Amazingly, nobody else was involved. 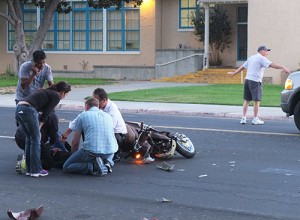 Our entire group sprang into action and fell into our roles, as trained. We were already looking to our lead instructor, Roxanne, who had the most medical knowledge. She took charge of rider care and we, her riding companions, became scene management; providing traffic control, support and relay of communications where necessary. The communication between us was clear, direct and concise. Michele fell in with Roxanne providing assessment and care to the rider. They had to ‘log roll’ her over while keeping spinal immobilization, as taught, to get to her face and held that position until help arrived. 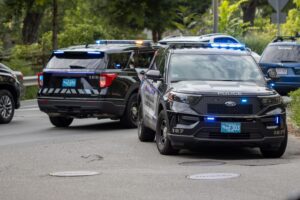 Steve and I immediately turned our attention to setting up workable traffic control, staging people where they needed to be to guide traffic to a usable shoulder on this still very busy highway. Emergency 911 was called, location given, and status of rider assessed by Roxanne and Michele was relayed to emergency personnel. We asked that a police car be backed, slightly, to allow more room for our shoulder ‘roadway’ to keep traffic moving. The officer complied and this assured a viably clear route and timely response by medical first responders. One of our trained ASM members, Angie, was able to direct emergency police, ambulance and fire to where they needed to be to safely access the rider and not block traffic. (AND THEY COMPLIED, ACCORDINGLY!)

There were some challenges, we found out, as various people stopped to help. Some declared they were first responders, insisting on giving “first aid.”….Hmm…no uniforms or credentials. Roxanne, being an RN and ASM instructor, wasn’t going to relinquish her role of stabilizing the rider to them. However, she and Michele asked questions and then politely allowed them to assist when necessary until identifiable help arrived. This was important, as these others wanted to move the rider, which could have put her further at risk. Had our rider had a spinal injury, which was unknown at the time, this one detail and confidence in our team’s ability to manage her could have been a crucial factor later in this riders recovery. When uniformed first responders did arrive, they helped the rider onto a gurney and transported her to the hospital. 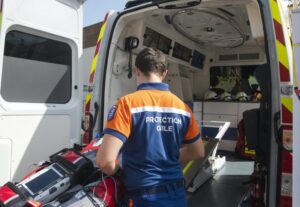 Gratefully the rider was alert and awake and suffered only a minor cracked vertebrae and tiny bit of internal bleeding. The potential for internal bleeding was already taken into account because Michele remembered that the rider had mentioned to her several weeks prior that she was taking blood thinners. Michele asked the rider to confirm that information. Thankfully, the rider was released later in the evening.

After the incident, both police and fire/ambulance specifically thanked us and expounded on how well we managed the situation. They said there was little else they could do except to transport the rider to the hospital, already prepared for her arrival. What a compliment to not only us, but to  you Vicki, for bringing this important, life saving training to us when you did. The skills you and ASM shared with us were tested at many levels to manage the scene while rendering aid to this injured rider. Each time we have had to invoke our training has given us the confidence and the satisfaction of knowing that we know what to do to help our fellow riders.

Sign up for a ASM class today and make sure you know what to do at the scene of a crash!