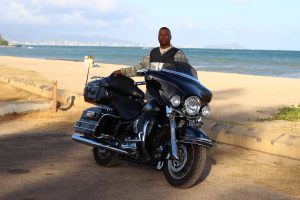 Waianae, HI – I have been riding motorcycles since I was a young child. My first Harley Davidson motorcycle was a 2005 Softail Deuce and I also ride a 2008 Electra Glide Ultra Classic.  I am a member of the HOG organization and Founder, Founding President and current member of the Buffalo Soldiers Motorcycle Club (BSMC) Jackson, TN.

I currently serve as a soldier on active duty military for 20+ years with several deployments to combat zones to include Desert Shield/Desert Storm where I had my first experience as first responder to traumatic injuries. Other deployments include Operation Restore Hope, Somalia and two deployments to Operation IRAQI Freedom where I was recognized for aiding and assisting wounded nationals as the result of a deadly night indirect fire attack.  Continuing education with the Army Combat Life Saver Course (CLS) program made this possible.

As the Senior Military Science Instructor at the University of Tennessee, Martin I developed and managed the military motorcycle mentorship program for the ROTC program at the college. While in West Tennessee I Orchestrated the first Ezra Howard Ride to honor WWII Veteran Ezra Howard who fought with the all-famous black 92nd Infantry Division known as the “Buffalo Soldiers”. Thanks to three counties and the support of local officials and police escorts, over 250 motorcycle riders rode over 65 miles with no incidents.