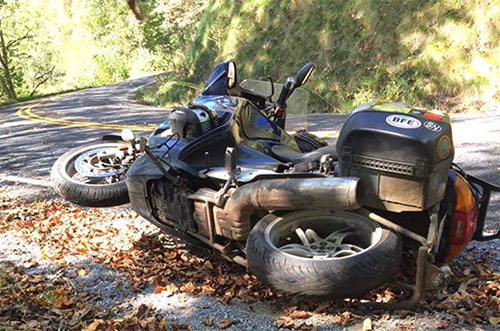 The following account was submitted by one of our students who completed Accident Scene Management Training Spring 2017. Just a few months later her training was put to the test.

“Let me start out by saying, Always bring your first Aid Kit!”

I almost didn’t bring it with me, thinking that our Road Captains would be equipped with a First Aid kit.

We were on a HOG chapter Discover Wisconsin Ride that took us through some of Wisconsin’s Rustic Roads. The road we were on was narrow with a tar and gravel surface. We were rounding a blind curve when the person in back of me took the curve too fast and crashed their bike. I heard, “Get my bike off of me!”

There were 4 of us who ran to the site and lifted the bike. The person was talking and I thought, “Ok, that means they are breathing! As I assessed the person I determined they were in shock just trying to grasp what had just happened to them. I asked if they were all right but my questions went unanswered. I sent someone down the road 100 yards to control traffic while I continued to deal with the victim’s emotional state. They were consumed with the condition of their bike.

Eventually we got the person on their feet while continuing to assess any issues. The person complained of possible broken fingers. I asked that they wiggle their fingers at which time they said no while actually wiggling the fingers. I got an ice pack out of my trauma kit and gave it to the person to put where they needed it. After 10-15 minutes the Road Captains got the person back on their bike and felt they were safe to ride. The rider got to a nearby gas station and decided not to go any further and headed home and from there went to the hospital ER.  After all, only X-rays could tell whether or not the fingers were broken. At the ER they determined that the fingers were sprained and they cleaned the Road Rash.

Though there were no serious injuries I felt grateful for the Accident Scene Management Training that I had. I was able to remain calm, assess the victim and give aid. Thanks! 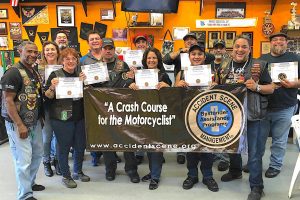 Have you taken an Accident Scene Management Class? Do you carry emergency response supplies? Unsure if you are you up to date with training? Contact us and we will be happy to look for you.